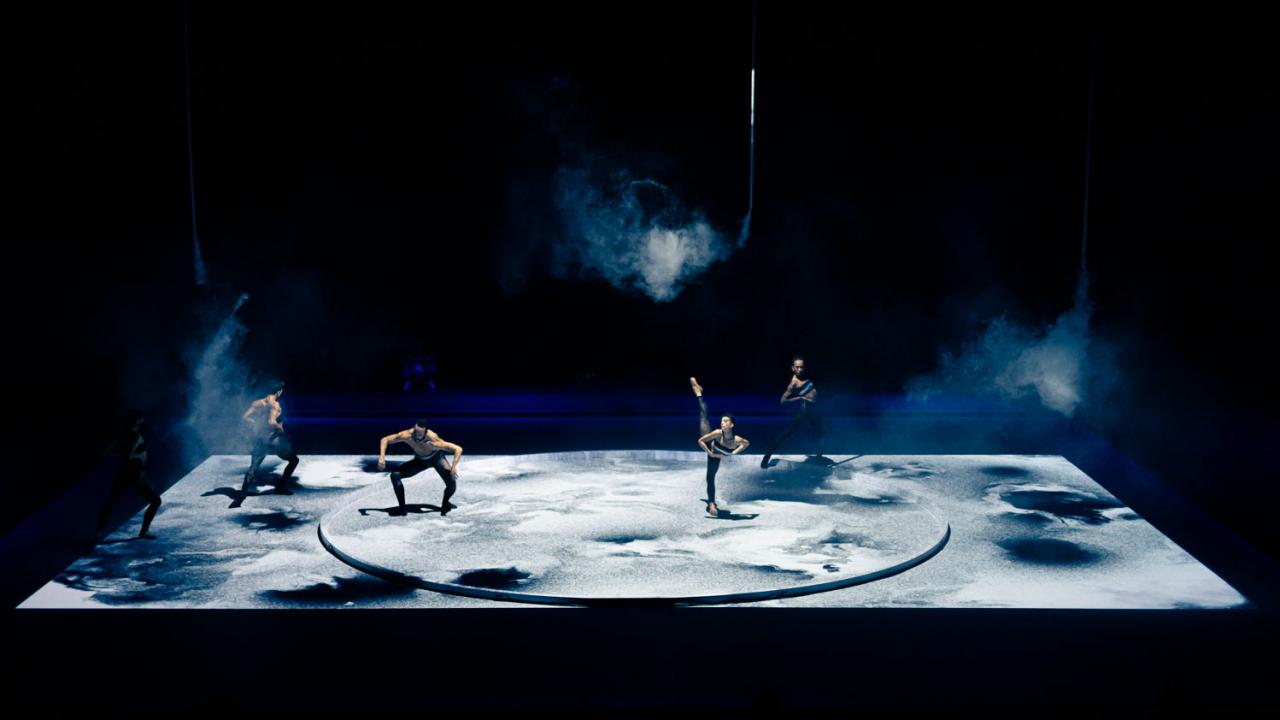 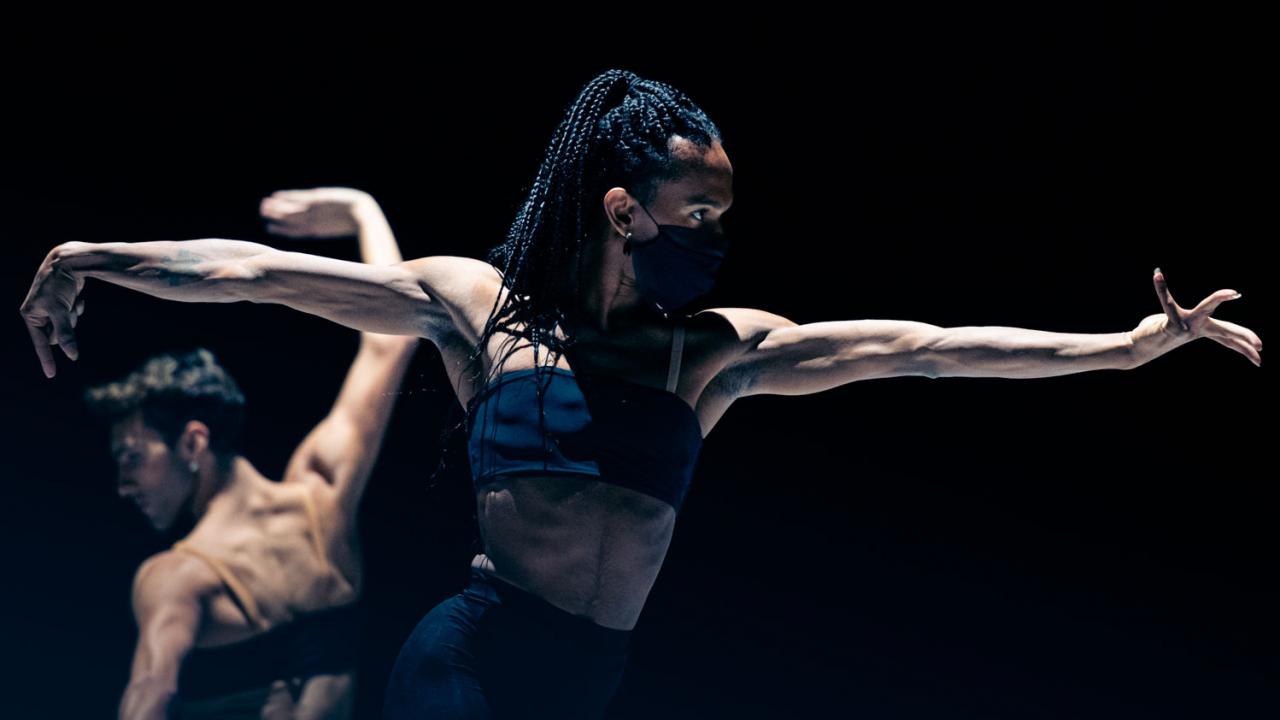 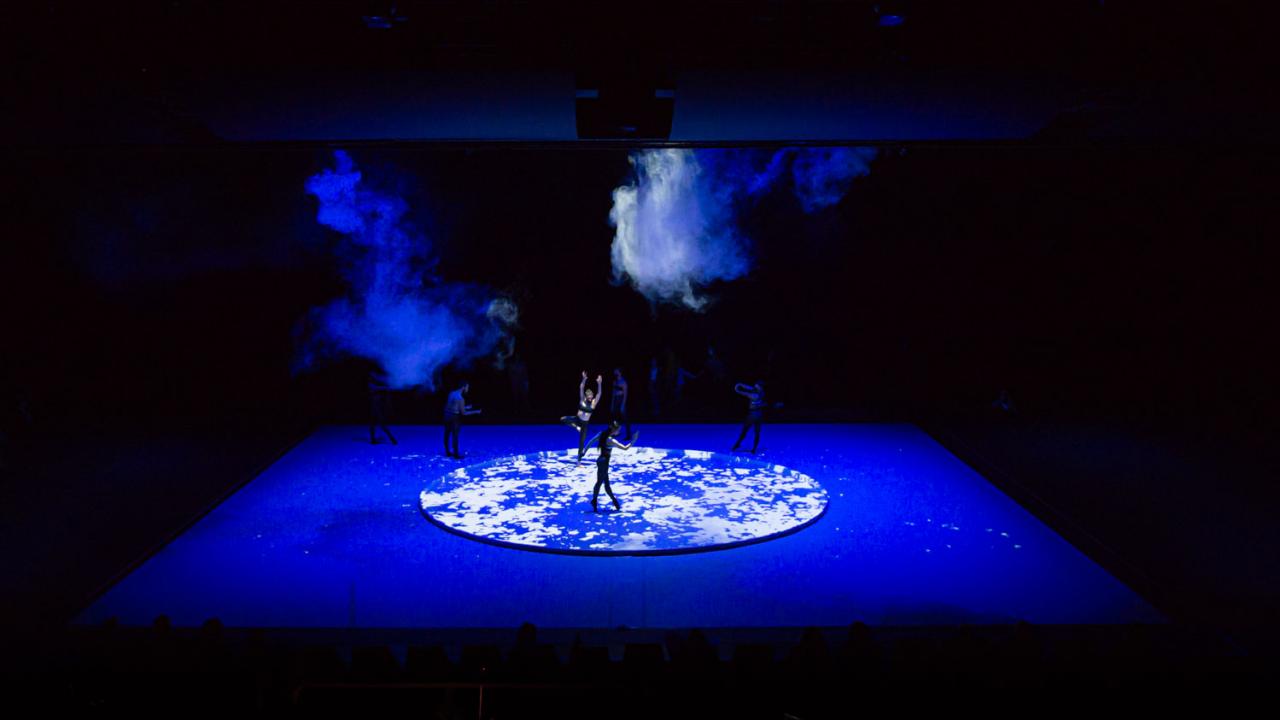 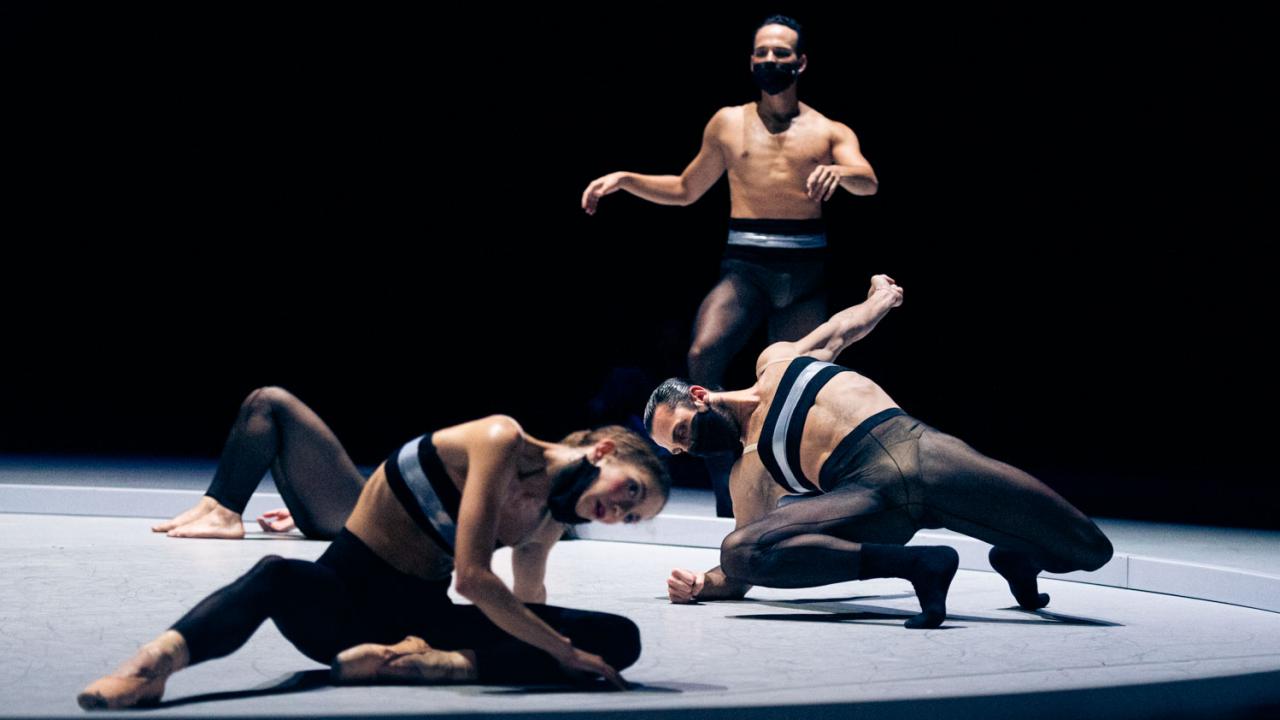 Fear of the Invisible

New Ocean is a piece about climate change, materialised in the melting of the polar sea. The structure of the choreography is – as I understand – depending on an algorithm. How can I imagine the working process?

I started in the studio by developing movement material with the dancers. I choreographed seven themes that tried to approach the balletic cannon of steps via somatic experience rather than historical.  The thought was to flatten the hierarchy between ourselves and our environment. We began by re-sensitizing our bodies to the Newtonian physics at play when we move, cultivating awareness of our bodies as material that is subject to the same terrestrial forces determining the behaviour of all objects, but also the effort required of our bodies to navigate these forces. To feel more acutely our relationship with the earth we largely had to work on inhibiting unnecessary tension; a sort of anti-effort, the work of not working, an act of will.

These seven themes were then transformed by a set of physical puzzles I proposed, problem spaces which each of the dancers solved for in their own idiosyncratic manner and by which means we multiplied the thematic material exponentially. This first phase of the rehearsal process resulted in a vast catalogue of movement phrases that numbers 143.

The next phase was to select from among the catalogue. For this I worked with the light designer Matthias Singer to develop two mathematical algorithms; one derived from data measuring the extent of 13 regions of the cryosphere, i.e. the seasonal waxing and waning of the (north) polar seas which scientifically demonstrates the dramatic trend toward the ice cap’s extinction.  The second algorithm uses statistical data gathered over the same time period tracking the public’s steadily increasing belief in the geological data. When fed by the catalogue of phrases, these algorithms output a signature order of the 143 phrases indexed to the ice from each of the 13 polar seas, effectively visualising the data and creating an intersection between our bodies and the climate catastrophe.

Furthermore, it is after UNITXT for the Bavarian State Ballet your second piece in relation to Merce Cunningham. What fascinates you about him and how is he "present" in New Ocean?

Cunningham’s work played a critical role in my artistic development. I was thoroughly baffled the first time I saw the company perform at New York’s City Center (1991?). Then I was equally and oppositely shocked when I returned to see the company the following season. It was as if the work had germinated in me during the intervening months. I understood that this dance didn’t expect anything from me, the viewer, apart from being in the same room with it. It was not asking to be decrypted or objectively interpreted. There was no single truth nor message apart from the thing itself, happening in front of me. The presence of the author was less detectable as the dance seemed to be almost a natural phenomenon, akin to watching crushed blades of grass unfolding or pollen aerially organising itself according to natural rules too complex to apprehend, but beautiful nonetheless.

One can say that the performance, though on stage, resisted the proscenium that framed it. In effect it didn’t need the architecture of an opera house that is designed to sharpen our attention by excluding happenstance stimuli from the outside such as light and sound and temperature. This dance did not necessarily even call for a front from which to be viewed ideally. This was indeed the case with Cunningham’s Ocean that I had the great pleasure of seeing some years later at Lincoln Center, performed outdoors and in the round.

On the occasion of Cunningham’s centennial birthday in 2019, I made New Ocean in homage.

The two works converge in a number of ways. The use of algorithms in New Ocean, for example, to determine in large measure the vocabulary and the performance’s structure, is directly indebted to the chance operations by which Cunningham created his dances. The effect, in both cases, is to put distance between the artist and the work by subordinating subjective choices to a mathematical system. In a more poetic gesture, the data of the algorithms that determine each performance of New Ocean is bound by the 26 years spanning the time between Ocean’s premiere and the premiere of New Ocean.

Obviously, you see an important relation between the climate crisis and the current pandemic situation. As a reaction you created the dance installation New Ocean Sea Cycle. What is your key concept?

New Ocean Sea Cycle is simply a ballet that could be made under the constraints we imposed on ourselves in hopes of protecting ourselves from Covid-19. It is a modification of New Ocean, a performance also shaped by fear of the invisible. Or put otherwise, they both measure our belief in the inferred unseen. In the case of New Ocean, fear of global warming is indexed. With New Ocean Sea Cycle, it is the fear of a microscopic virus that defines the form of the performance. Over and above that, New Ocean Sea Cycle called attention to the gravity of our predicament by taking place at all, by causing the spectator to have to chose if he or she feels comfortable to venture into society.

Strangely, New Ocean anticipated rules we have sadly since come to live by. Namely, in the performance the dancers never touch, avoid eye contact, and are free to determine their own proximities. This was done to allow for them to give maximum attention to the sensations in their own bodies while dancing. It rendered them isolated, the image of a atomised society, as has been our experience under social distancing. So to a degree New Ocean was safe to be performed 6 months before the pandemic struck, at least for the dancers. There are three populations who constitute theater, however. In addition to the dancers there is also the public and there are the people backstage, e.g. technicians. New Ocean Sea Cycle differs importantly from New Ocean in that the spectators, like the performers, are able to regulate their own density. Rather than maximise the number of spectators by condensing the time of the performance and by seating people as close together as possible, New Ocean Sea Cycles preads the audience out physically and over a much longer duration, (the time it takes the dancers to complete the entire cycle of 13 seas, approximately 13 hours). The public ebbs and flows in and out of the performance in safe numbers, mirroring the collective organisation the dancers perform.

"New Ocean Sea Cycle: Pinakothek Ed. 1 /14 – Baffin" will be streamed as a film by Nightfrog (Director: Benedict Mirow) from the Pinakothek der Moderne on the occasion of the rotunda project of the Collection of Modern Art: ANISH KAPOOR – HOWL on ARTE CONCERT und BR-Klassik Concert on May 16 at 8 p.m.