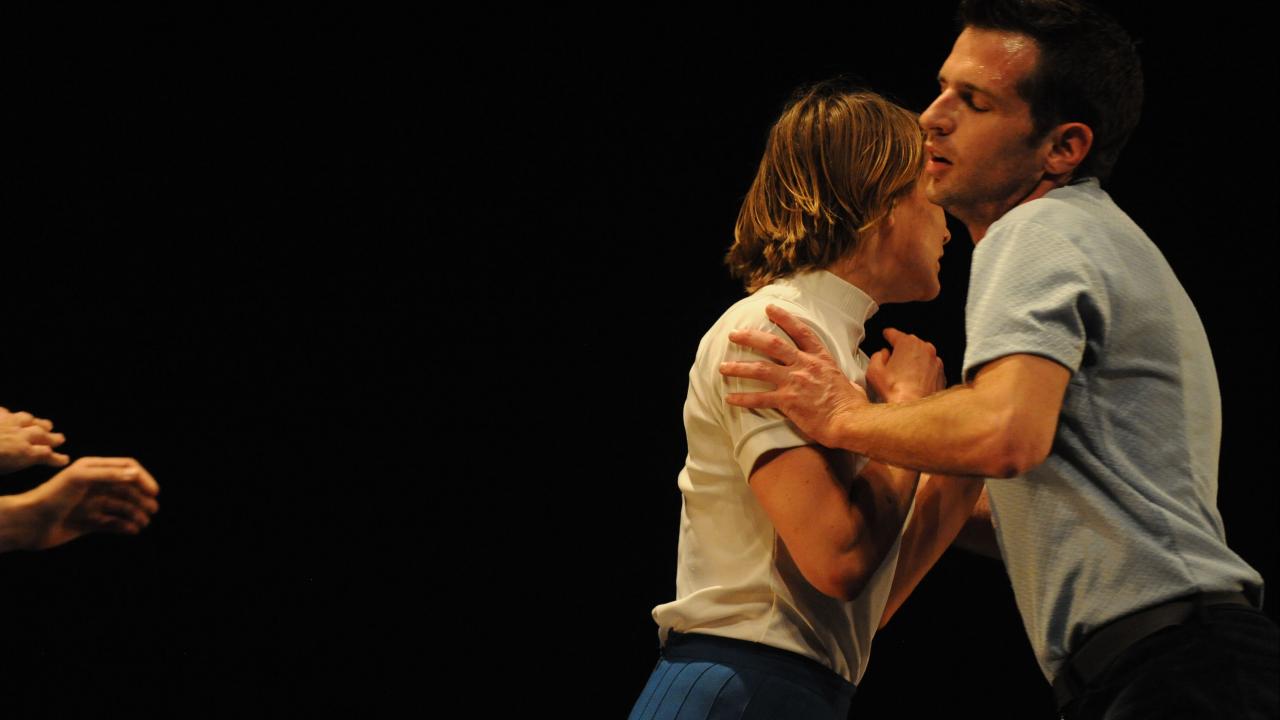 In harmony, next to one another. In lock-step, and it turns into a march. Two men and a woman move in unison. They walk, start doing folk dance steps. The woman, Keren Levi, wears a blouse and a skirt in the national colors of Israel. She varies her pattern of movement, steps out of line briefly, and the men watch her. She integrates herself again, touches her partners, who approach her and bring her back into the state of conformity. The piece "Big Mouth" was developed in 2009 in collaboration with Keren Levi by the Israeli duo Niv Sheinfeld and Oren Laor, and it embodies the tension between individual desires to move and the power the movements of marching have to draw one in, between personal development and collective strength. The three of them hold each other, stay close to one another until it isn't possible anymore, and the woman distorts her mouth into a scream and in the end leaves the men standing there.

The short piece "Big Mouth" deals with the desire to develop oneself in fixed structures and the tensions that are created from this. The consonance of marching with arms swinging almost has a calming effect. The marching people are not exercising a martial "right-left-right-left" pattern, but rather come together in a calm, mutual motion that may tolerate short disruptions, but in the end does not allow them to continue in the long run. According to the critic Elisabeth Nehring, the piece illustrates "how Israel's society functions in its core and in its entire ambivalence."

Sheinfeld, born in 1972, was a dancer in Liat Dror and Nir Ben Gal's company, and he created choreographies for Batsheva Ensemble and Kibbutz Dance Company, among others. Oren Laor, born in 1971, studied acting and drama at Tel Aviv University. The two became a couple in 2002, and started creating together in 2004; they are based in Tel Aviv.

They have already performed in 2015 at the DANCE festival, when they showed "Two Room Apartment." For "Big Mouth" they had their colleague of the same age, Keren Levi, join them. She went through a similar dance socialization as Sheinfeld, and for the past two decades she has been living and working as a choreographer in Amsterdam.

HERE TO THE STREAMS

Artist Talk with Seinfeld & Laor on May 14, 4.45 p.m. at the symposium Articulate! Activate! Protest!