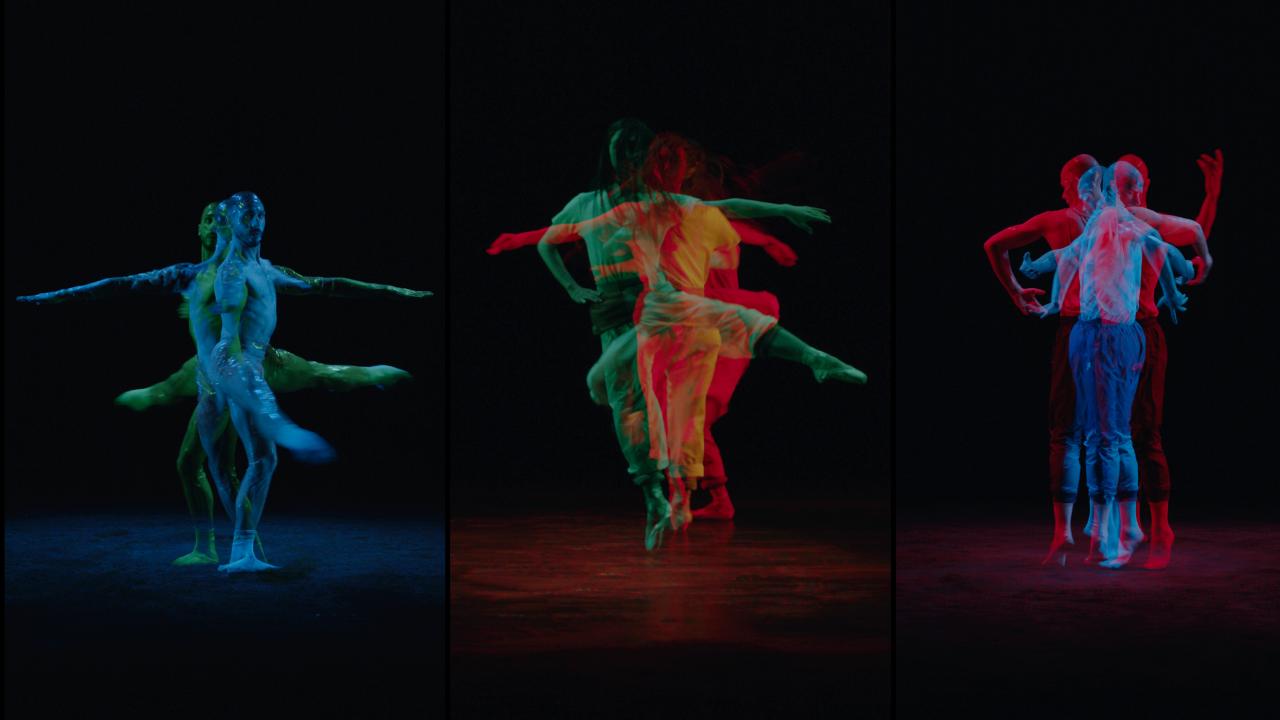 What long-term effects will the Covid-19 pandemic have on how we use and see our bodies can only be vaguely discerned. The legitimate fear of infection, the general anxiety of being touched, the vibrant visions of invasive viruses and mutations are already beginning to show.

The curator, dramaturge, and artist Tobias Staab developed with the dancers Ballet of Difference the video installation "Trans Corporal Formations," whichfocusses both on the avoidance of contact and extreme closeness and hermetic bodies, and on the other hand assimilations. With this project Tobias Staab is searching above all for the transformative potentials of dancing bodies. Moving through different forms the body appears as a utopian location, where the difference of a binary structured sexuality dissolves precisely like the boundaries between humanness and non-humanness, between analogue reality and virtual reality.

The individual dancers appear to be isolated from one another on each one of the five screens. Togetherness, interaction, and touching are only possible in the realm of the digital, which in this manner becomes an essential part of the choreography. The sounds that were generated by the dancers' bodies were recorded by the Munich-based composer Benedikt Brachtel and "scaled up" acoustically in order to arrange them into a "musical collage of the body." (Tobias Staab)

Tobias Staab developed the concept of "Trans Corporal Formations" in close collaboration with the set designer Nadja Sofie Eller. The special dimension of physicality was created by the surreal costumes designed by Annika Lu Hermann, which then were re-enforced digitally by an algorithm (timewarp choreography) developed by the artist Michael Saup. The camera was operated by the Munich-based video artist Florian Schaumberger.

As a specialist in the interface between experimental electronic music, dance, installation art, and performative art, Staab has launched and curated numerous programs and festivals (Ruhrtriennale; Ritournelle; Noise Signal Silence; Panta Rhei; Bauhaus Club 2.019: Hyper.Culture; and Dive Festival für immersive Künste). He founded with the choreographer Richard Siegal the dance company Ballet of Difference in 2016. He has been working since 2019 as a director between performance, dance, and film. "Trans Corporal Formations" makes it possible to immerse oneself in audio-visual portrayals of the dancing body – transformed through pixels and glitches (short-term disturbances) and made audible in an immersive sound space.

A co-production of DANCE, Ballet of Difference, Muffatwerk München, and Schauspiel Köln
Funded by the Department of Arts and Culture, the City of Munich